I feel like I should explain my religious background because you cannot go to a place like this and be objective. I grew up going to a Christian church and went to a small, Christian high school were I was taught intelligent design. I then went to a huge, liberal college where I took a few religion classes that focused on the history of Christianity and also a few geology classes and one mini class on dinosaurs. Where I personally stand is this: I personally believe there is something out there, but not necessarily a god as Christians describe it. There is a lot of science that makes sense to me and a lot that doesn’t. There is too much information infused with opinion for me to make a definitive answer on anything. My religious opinion is this: I don’t know and I probably never will. As I am constantly searching, I am open to any and all new information and I try my best not to make judgements.

With that out of the way, ladies and gentlemen: the Creation Museum.

The parking lot was packed. The first thing you’re greeted with a dinosaur out front. There is a security guy out front, probably to keep protesters and vandals away because the sign on the door reads as follows:

The tickets were stupid expensive: $30 each. They were two day tickets, which we thought was a little strange but after going through the museum, we now know why: they crammed a lot of information in that building. There is probably a novel’s worth of text in that museum and no one could possibly read it all in one day, let alone look at the exhibits. 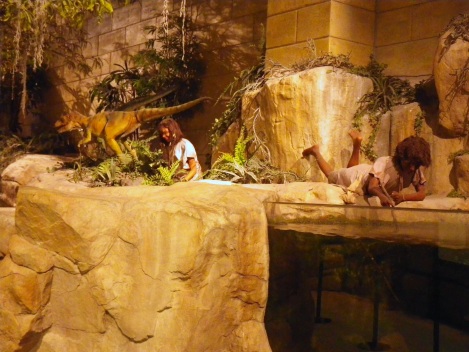 So the first thing we see are dinosaurs. And kids. With the dinosaurs. That probably seems odd to people but it actually says in Genesis that every single creature in the Garden of Eden was vegetarian. Now, Adam and Eve only had kids after they were kicked out of the garden, which is also when God lifted the ban on eating animals so I’m not sure how there are kids playing dinosaurs according to the Bible.

They had some seriously quality animatronics. Like seriously impressive. There wasn’t any of that jerky-old movement that simply repeats every 2 seconds. This stuff was subtle. And the loops were several minutes so it looked more like independent behavior as opposed to a computer program. Just in the front room, you can see where our $30 each went.

Most of the stuff moved. This one roared above my head and scared the crap out of me.

The sign guys were funny. In case you can’t read it below, the sign says: He’s not very friendly and neither are the costs to repair him.

They had hilarious signs.

The first bit of the museum was all about dinosaurs. I honestly didn’t read all the information because I was too busy looking at all the cool stuff. But from what I read, it wasn’t anything I hadn’t heard before: problems with carbon dating, whether scientists believe in the Flood or not being key to how they interpret information, sediment layers not being an exact dating system.

They seemed to focus only on the shortcomings of evolution without pointing to their own. One thing I did learn in school that I saw here, and that has always bugged me, was about Mount St. Helens. It erupted and put out thousands of years worth of sediment in a few hours. This had always been pointed out to me as proof that sedimentary rock timelines were flawed and that the Grand Canyon could have been created in months, not millions of years. This sounds convincing but no where in the museum does it explain what evolutionists have to say.

The Creation Museum is very biased. But then again, they could probably say the same thing about other museums.

After the dinosaurs, the museum focused on what happens when people don’t believe in God. Now, I can tell you from personal experience that a lot of Christians tend to lead a more sunshiney life than non-Christians. They’re not as cynical and believe everything has a purpose.  This has absolutely nothing to do with if there actually is a God; but if people believe there is one. But we’re not here to get into a theological/humanist debate.

Let me just tell you that this part of the museum was actually really creepy. It was strong enough to make an impression, but not so over-the-top that it became campy. No matter how anyone feels about the Creation Museum, absolutely no one can deny their production value.

The hall of badness. 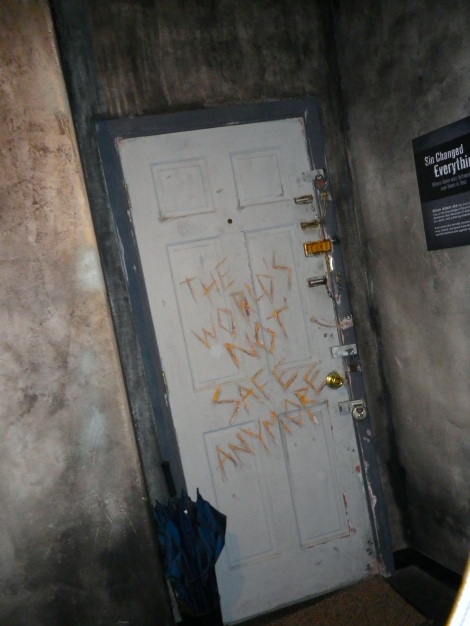 The story of Ota Benga was absolutely insane. Basically he was put in a zoo with monkeys. The fact that the Creation Museum highlighted his story is very interesting. They said that because of evolution, some peoples were seen as subhuman and treated like animals. However, the Creation Museum failed to mention how the Bible was used to justify slavery in America. They may be stating facts, but the facts they are choosing to state are very telling.

After the Hall of Badness, which I have decided to call it, we came to the story of Adam and Eve. The layout of the museum confused me. We went from dinosaurs to cultural ills, and finally to the story of the Garden of Eden. Maybe they were going for evolution is incorrect and look where it’s led us, here’s the story of what actually happened? I’m not sure. 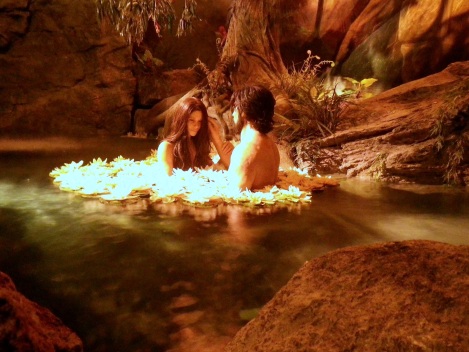 Again with the animatronics. Amazing stuff. The Garden of Eden must not have gotten a lot of sun because it was dark in there and pictures were hard to take. Too dark for no flash, not dark enough for flash. Oh well, there were no cameras back then anyway. 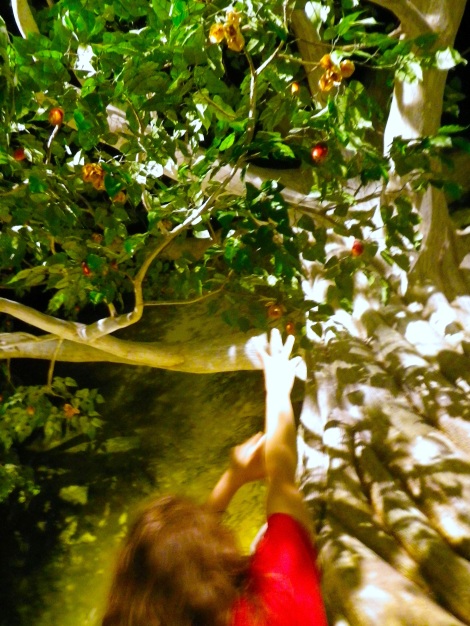 I couldn’t reach any of the forbidden fruit, they were too high up.

Continuing along with our history lesson brought to you by Genesis, we move on to Noah’s Ark. Apparently baskets were in. Unfortunately I don’t have a lot of pictures of the Noah’s Ark exhibit. I was so dazzled by all the animatronics. Basically you walk through an ark construction site and animatronic people paint a picture of what it was like.

You could go inside the ark, which was really just a high, slightly curved wooden wall you then went behind, and it talked about how an ark like this could have been made. Now, many people scoff at the idea of ancient people building something like an ark. But looking at the pyramids or Polynesian boats or any number of ancient innovations, I don’t really think an ark would have been that hard, honestly.

Baskets were all the rage. Seriously quality animatronics.

After the ark, we went into the next section with showed more ark details. Again, it was so freaking dark but not dark enough for flash. All the pictures were either blurry of so blown out it looked like the second coming of Jesus.

There were some cool dioramas, but I’m a sucker for anything miniaturized. They had giraffes next to dinosaurs and, whatever you think actually happened, the sight of giraffes and dinosaurs hanging out made me smile. They both had long necks! Now giraffes are the only ones left in the Long Neck Club. Sad.

Anyway, the room came up with some ideas for how they could have cared for all those animals using a complicated cage system with feeding tunnels and grates for waste. There was also a life-sized Noah you could ask questions to using buttons. He was actually pretty funny; he made jokes and laughed a lot. Seemed like a fun guy to hang out with. 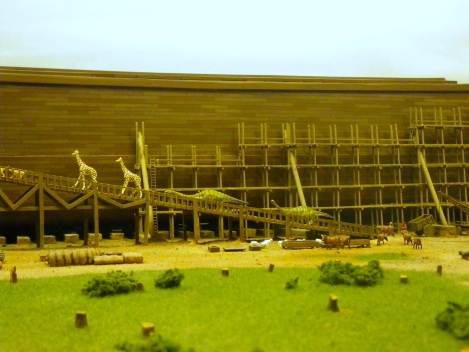 After that, we were spit out into the cafeteria and we saw a few small areas focusing on rocks and insects. We headed into the insect place when we got the call about the Red Wolf Sanctuary. We looked at the insects really quick and forgot to take pictures because we were in such a hurry. It’s a shame though because that place was super cool! Basically any insect you can think of, they had on a pin board. Also, I’ve learned that any insect over 5 inches long goes in my nope column.

All in all, I’m glad we went but it would have been much cooler if we didn’t pay $30 each. I understand the two-day ticket though, we were rushing at the end and couldn’t read all the information. Mostly because we were so tired from the weekend. Little kids might get a kick out of the animatronics but a lot of the text would be lost on them.

If you’re a hard-core evolutionist who hates Christians, you’d probably come out of the museum as a dis-embodied rage spiral. If you’re a creationist or believe in intelligent design, you’ll probably love it. If you’re still searching, it will give you more information to think about. I can’t really recommend it because it all depends on who you are when you go in. Which, honestly, most museums can’t boast, so that’s a thing I guess. 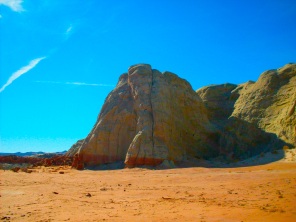 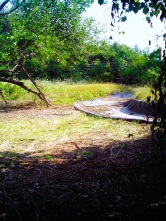 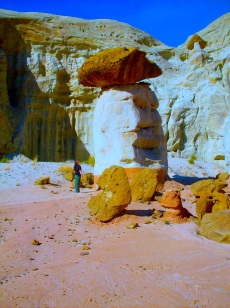 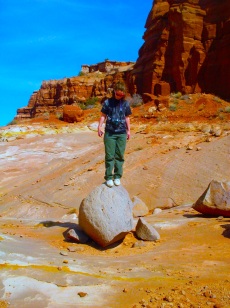 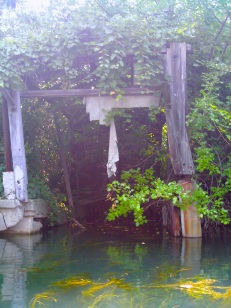 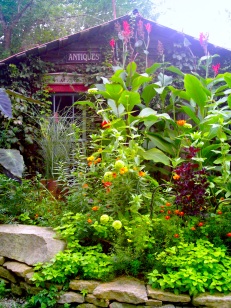 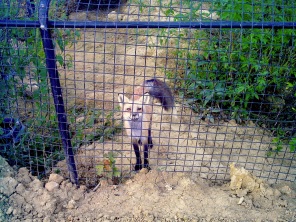 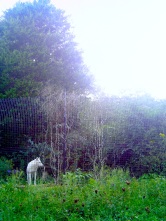 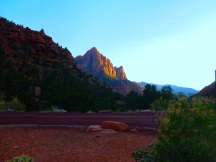 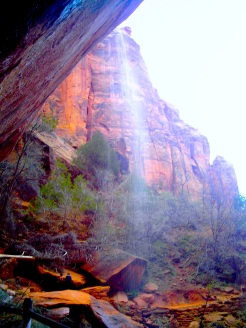 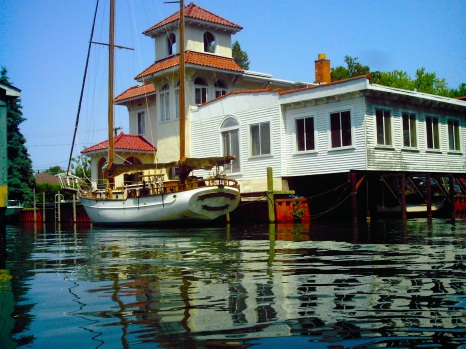