The local paper in Michigan did a story about Detroit Canals. We’re only 40 minutes away so we decided to go on a Saturday in the afternoon. The article didn’t state where they put in so I had to do some research and Google Map zooming to locate the canals based on descriptions. I’ll save you guys the trouble: you put in at Maheras-Gentry Park. I just saved you an hour of your time. 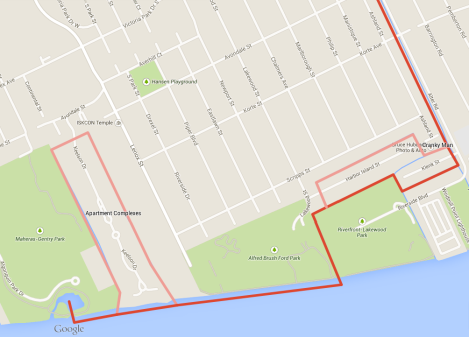 The path we took on the canals.

We had a map of the canals I printed off Google Maps and secured in plastic so I could keep it with me on my kayak. But basically, any time we could go left, we went left.

Maheras-Gentry Park where we put in.

The park itself was very cute. There were a lot of parking spaces and the “boat launch” was right off the parking lot. There was a family reunion in the park and everyone was wearing orange. My dad was hungry but wasn’t wearing an orange shirt so he was SOL. Also, everyone at the reunion was black and my dad is so white people think he’s signalling for help.

The “boat launch” was more of a small cliff with giant rocks haphazardly making steps down into the water. It was difficult. You needed at least two people to get the kayaks down. It was also very small. It was definitely not a planned boat launch, just the best place to put in.

My dad getting the kayaks down. This is why he comes along.

Once in the water, you leave under a foot bridge onto the Detroit River. The Detroit River is a bustling water highway with container ships and speed boats. The wind was barely blowing but the water was choppy.

Going under the foot bridge to the Detroit River. 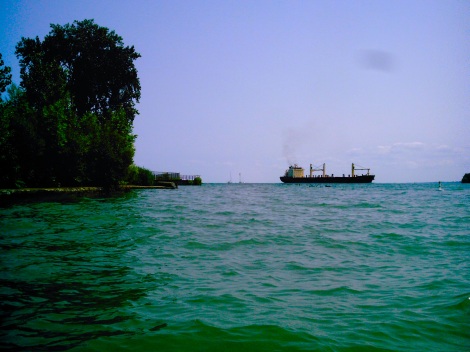 We paddled along near enough to the shore that boats wouldn’t run over us, but not so close that we’d get dashed against the retaining wall. There was a path along the wall for people to walk and fish and we got plenty of looks. The Detroit River is not something one would think of kayaking. It isn’t exactly a leisurely paddle and I’m not one to wear my life jacket usually, but I wore it this time. 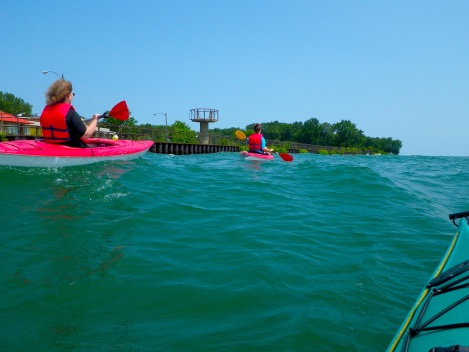 The Detroit River was a little choppy.

After a little bit, there was a channel to our left so we took it. We took off our life jackets because the river was barely moving and had a nice look around. One side of the channel had apartment complexes, which took us completely by surprise. They looked homogeneously new and didn’t have much personality.

The first channel we went to had apartment complexes along the canal.

Across the river from the apartment buildings was pure nature. Every so often, there would be a break in the trees and we saw tiny inlets. Finally it dawned on us: parking spaces. Parking spaces for boats. They weren’t kept up so there must have been something here before the apartment complexes were put in.

We started kayaking closer to the nature side because if you’ve seen one apartment complex, you’ve seen them all. It was creepy. There were hundreds of birds and it was completely overgrown. It didn’t so much look like nature had taken over, but that there could be hiding something inside it. There was a void about the place that encouraged me not to get out. Now it was just the side of Maheras-Gentry Park but I don’t think many people venture that far away from the gazebo by the parking lot.

The other side of the apartment complexes was all nature-y.

There were a lot of “parking spots” for boats. 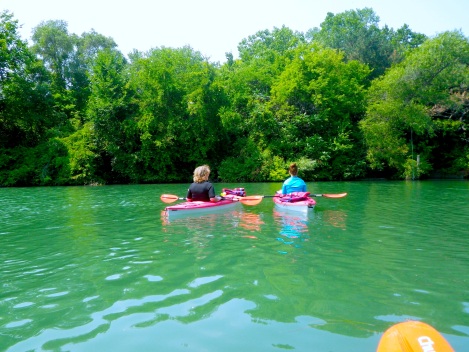 It was very Jurassic Park-y because you could hear lots of animal noises.

We followed the channel into a square “loop” and it put us back out on the Detroit River. We continued along and went into the next channel. This one was vastly different from the previous. Finally you could see history and culture as interpreted by time and personality, not blueprints and zoning boards.

Getting into another neighborhood.

Each house was different. Some were huge, others small cottages, a few abandoned. We came upon a big white house with an extremely cool sailboat sitting out front. The map didn’t show there being a channel there but it looked like it went somewhere. Using the unspoken “go left” rule, we went left. We crossed under a small bridge, went up a tiny bit, and then followed it to the right.

Look at this boat!

This was by far the coolest part of the canals, between Harbor Island St and Scripps St. Each house had so much personality. Some were horribly run down but others were absolutely amazing. There were not a lot of people around: only two men sitting on lawn chairs chatting away. They told me I had an Olympic stroke. I had no idea what the hell they were talking about so they made paddling motions. Basically I’m an idiot who shouldn’t be allowed to talk to people. Anyway, I thanked them and continued on my way.

The reason this channel was the best was mostly because of one house. There were huge sunflowers surrounding the property and we were greeted by an extremely happy dog. On the side, we saw a garden hanging down towards the water. The person had planted squash and tomatoes and, instead of staking them so they’d grow up, this person let the vines hang down because the yard was several feet above the water.

There were actually quite a lot of dogs there but this guy was the nicest one.

This channel only had one caveat. As we were following the channel, it turned right and had the option of going left again. On that corner, we heard a man yell, “Shut up!” He came storming out of his house and saw us. “I hate you kayakers, making noise.”

My mom laughed and said, “Yeah, sorry about my wake.”

He replied, “There’s so many of you. I might have to go get my gun.”

He then went back into his house. He did not appear to be joking. We kayaked a little faster. I realized later he was yelling at the barking dogs to shut up. There were a lot of dogs in people’s yards and houses and they did bark as we approached because they’re dogs and that’s what they do. Having not many people on the canals before the newspaper article, I guess the residents aren’t used to so much barking.

So the channel described above is the best part of the trip but you have to go well out of your way to avoid the angry man.

Kayaking through the neighborhood.

We went left yet again and found ourselves on an extremely long channel next to a road. This is where we encountered the most abandoned homes and sunken boats but also some great surprises.

Next to the road.

There were a lot of abandoned boats and houses. 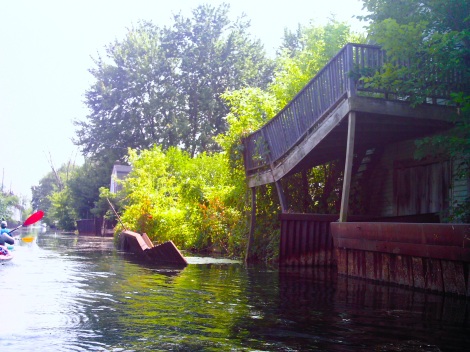 The seaweed was gorgeous under the water! 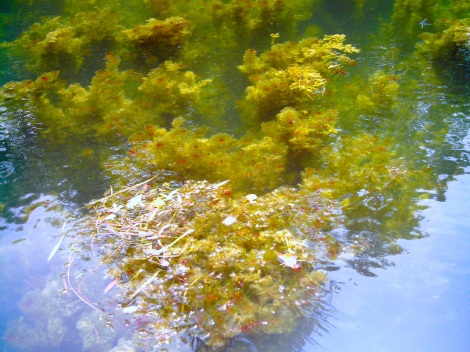 The afternoon light lit up the seaweed.

First, the seaweed was gorgeous under the water. And because a lot of this area was run down, nature had started taking over again and we saw the biggest dragonflies anyone has ever seen ever. They were moving around too fast so we never got a good picture but it felt like we were in some jungle where the bugs rival houses for size.

After continuing down a little ways, we finally encountered power and telephone lines. Squirrels were dropping loose sticks on our heads from the trees above and the birds wouldn’t shut up. The houses were brick and sat so close to the water.

The foliage was pretty fantastic. 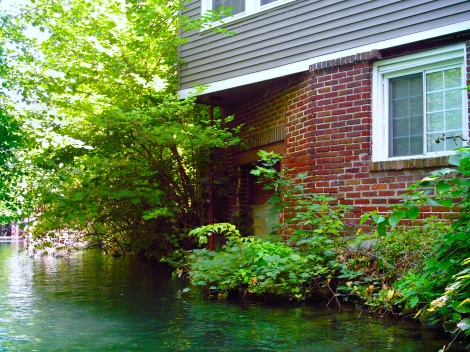 My favorite house. Sooooo close to the water…

This person’s lawn is thinking about joining the river.

Finally we reached the end of the channel. Kind of. It went under a road but it was pitch black and we didn’t have a light. I have a mantra of when am I ever going to be here again? so we went in.

The end of the river. Wonder what’s in it?

Immediately when I got under the bridge, I could see. The paddles were too long to paddle so we walked ourselves down with our hands on the ceiling. The ceiling and walls were COVERED in spider webs. We had to place our hands carefully but sometimes we couldn’t avoid all the webs. I didn’t see any spiders, and I chose to seek comfort in that fact.

Guiding our boats through the tunnel with our hands while trying to avoid the ridiculous amount of spider webs.

The end was…filled with garbage. We could see the end of the tunnel just beyond the trash and my mom and dad started to go back. But I couldn’t. I had to go further. I asked if I should. They said no. I sat there and debated. Finally I decided. I was going to touch the wall at the end of the tunnel. I ignored my parents and pushed off the wall…where I went 3 inches and was stopped by the density of the garbage. I literally couldn’t go any further. I got freaked out and turned back because I kept imagining the one eyeball tentacle thing from Star Wars.

The tunnel ended with trash. So much trash we literally couldn’t push our kayaks any further.

We ate a quick snack in our kayaks and then we went back. We passed by the house next to the angry old man as quickly as possible and went down a different channel. We wanted to get as close to the park as we could in the calmest water we could find. On the way, we saw more of the neighborhood we had missed when we took our more northerly route.

There were also some HUGE houses. Look at the garage!

On the way back we saw a parking lot for boats at a now-abandoned maintenance shop, something that blew my mind with an overwhelming feeling of “of course.”

A parking lot for boats!

The Detroit River was still rough when we went back and we were tired. We’d been out there for 3 hours because we lost track of time looking at everything. The “boat launch” was being used by two different families so we had to sit for a bit until there was space. Getting the boats up those steep, huge, uneven “steps” was impossible. We hadn’t stretched our legs properly for 3 hours and our butts were numb. I couldn’t climb up them with half a boat in my hands. Thankfully, a man offered to help us get the boats out and we told him we’d been out there for 3 hours so he didn’t think we were weaklings. I don’t think he cared though.

The bottom of the kayaks were still brown from the trash at the end of the tunnel so we had to hose them off when we got home.

Reflecting on the day…or whatever.

The city of Detroit has some amazing buildings and you can see some really cool stuff just by driving or walking around. The Detroit Canals didn’t show a different side of Detroit; it was still Detroit through and through, but instead of walking over cracked sidewalks or driving into potholes, we could experience Detroit on soothing, swaying water and we could finally hear the lullaby of Detroit: a simple, romantic song that made us nostalgic for a time long gone. 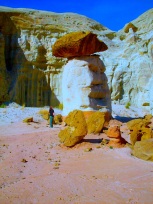