If you are near Detroit and you look up abandoned places, Belle Isle Zoo pops up every single time. Basically, it opened in the early 1900s and has been around forever, evolving and growing with the times. Then it was closed down and simply abandoned.

Belle Isle was also kind of abandoned at that point but they recently opened it back up for people and are renovating it. So the abandoned zoo is going to be torn down soon, which is a total bummer.

Belle Isle was packed. There were multiple family reunions and just a mass of humanity. People started parking on the sides of the roads, and we followed suit.

A satellite view of Belle Isle from Google Maps shows where the abandoned zoo is. I’ve marked it below on this map.

The star shows exactly where the abandoned zoo is.

We parked on the side of the road on Central Ave next to a high fence with ivy and trash making themselves comfortable. We walked up the road a little ways and found the entrance to the zoo! They had put a high fence around the entire place but left the main entrance unlocked and uncovered.  Except we could not get in there. The ivy was so thick that the doors would only move about an inch either way. It was ridiculous! 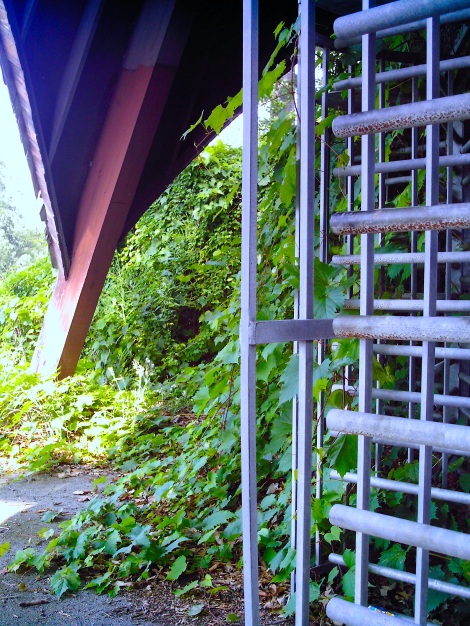 The entrance to the abandoned zoo.

We walked up Central Ave a little ways but it was just fence as far as the eye could see. So we walked back past the car and found an open area where we could see the backs of some of the zoo buildings. The fence wasn’t that high at this part, but man they must be paying that ivy. It made it impossible to see through the chain link fence and kept any possible openings shut tight. 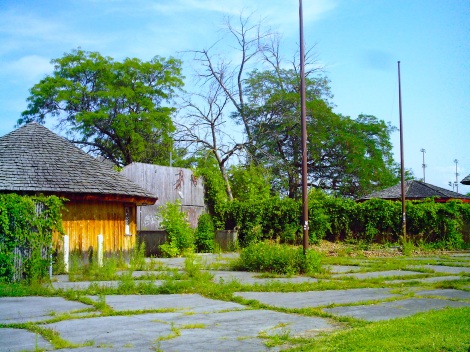 I was worried that we wouldn’t be able to see the zoo. We went around the back to Loiter Way. The fence was still as high but it had less ivy. Then, a gate. A large gate that rolls away to let vehicles in. I tried to pull it open but it was locked. Then I pushed on it. It swung in about two feet. Huzzah!

My parents were too afraid to go in so they said they would be look out. There wasn’t much looking out to be done in my opinion because while the front was packed with people, the back had a few tennis courts and maybe three people total enjoying them. But whatever. I went inside.

This area was particularly creepy for some reason.

Alright, it was creepy. I was initially afraid I was going to find dead animals for some reason. Like they had abandoned the animals when they abandoned the zoo or something crazy and irrational like that. But nothing like that.

What I did find was boxes and boxes of zoo material. Little coloring books, tickets, flyers, and the like. I grabbed a coloring book and some tickets. The boxes had been ripped open and the material strewn about. The tickets were on a roll that someone had thrown down the stairs like someone thought the roll of tickets looked like a roll of toilet paper and just went with it.

The buildings that were standing were very art deco and very cool. There was graffiti everywhere and, as I encountered more trash, I became more and more nervous I was going to find people back here. I mean, they found a dead body a few months back. A homeless man.

Apparently the graffiti artists thought they were better painters.

Then I came upon the animal enclosures. They were fenced off and I couldn’t get inside from there but I’ve seen pictures of urban explorers inside them so I know it is possible.

But let me tell you, it was getting creepy. It had been about 20 minutes and I was by myself. But there was the possibility there was someone else there, someone who knew the place better than me. Also, the further I went in, the more wild it got. Animals were not used to being disturbed here and birds would fly out of bushes in front of me, screeching their outrage. The birds were strange here. There were none flying overhead, they were all in bushes. And I saw more than one walking around. Not flying. I always assumed birds flew to get around but maybe they only fly to get away from us.

An animal pen with a place for running water.

I came upon a tunnel. I was underneath the boardwalk that zoo visitors used to look down into the animal enclosures. The tunnel must have been for employees.

I went back at this point. I was thoroughly creeped out and tiny green bugs had discovered my presence and were trying to make me their new home.

I ran back the way I came, jumping at the birds shooting out of bushes in front of me, and found the gate. It swung open easily and I ran to my parents who were chillaxing under a tree. They said a security car drove by twice. 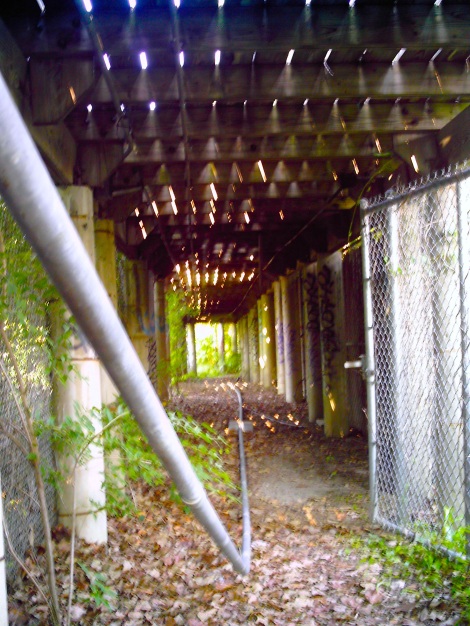 I found a tunnel between the animal enclosures! Must have been for the workers.

The entire time I was in the abandoned zoo, I could hear people and music just on the other side of the fence. People were going about their business, not knowing I was inside exploring this place. I felt invisible. Like I could see and hear them but they didn’t know I or this place existed. At first I was worried I would be caught. But then I realized that people didn’t even care enough to look. 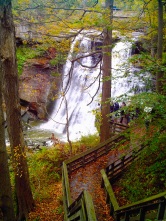 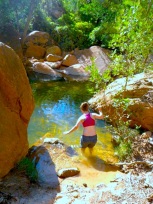